Fatima Mission is a very large mission (225,000 acres in size) based in rural Zimbabwe, 220kms from Bulawayo. Practically everyone living within its boundaries are poor subsistence farmers. Despite its size it is overseen by one Franciscan priest, Fr Jeya. It has a number of primary and secondary schools and a clinic within its boundaries. Due to the great need and the number of projects needing help within Fatima Mission, it has been and will continue to be the project African Mission is helping most. 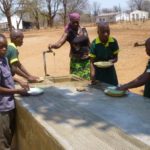 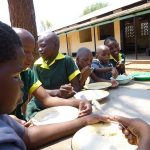 Activities centre for disabled young people. At the end of the school day there are no activities to occupy the young people. Fr Jeya felt that he would like to rectify this by building an activities centre. What he had in mind is a large room with three smaller rooms off the large room. The large room would be dual purpose i.e it would be used as a dining room and a sports room (when not being used for meals). One of the three smaller rooms will be used as a library, a second room will be used as a music room and the third as a computer room. As you can see from the photo below (taken in October 2019), the work on the outside of the Activities Centre is complete. At the end of September 2019 we sent Fr Jeya the final installment needed to complete the building. 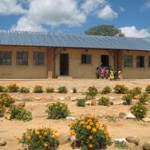 The primary schools and some of the secondary schools (Lubimbi Secondary School) are attended by poor children. In 2009 the physical state of the primary schools was very poor. Since then African Mission has built a new double classroom and a teachers cottage at Dungu Primary School (246 pupils). We have put a new roof on a double classroom at St John’s Primary School (280 pupils) and provided tables & chairs for four classrooms for St John’s and intend providing the same for Dungu. 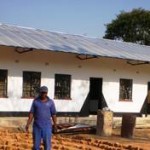 In addition to providing Dungu Primary School with textbooks, exercise books and pens we have also funded the school fees and living costs for poor children (many of whom are Orphans or have only one parent alive). We have also funded the building of a new classroom (see adjacent photo) and new accommodation for the teachers.

St John’s Primary School is in a very remote rural area, 2 miles from the nearest road. The children are very poor and the literacy rate is extremely low. Although there are 2 classroom blocks (with 2 classrooms in each) only one had a roof. Thanks to our supporters we were able to pay for a new roof (see above photo) and equip each of the 4 classrooms with tables and chairs. We also hope to fund the building of a Teachers cottage in the first half of 2012. 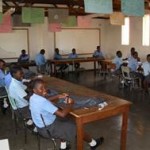 One of the secondary schools within Fatima Mission is Fatima High School. It is a very good school academically offering both boarding and day facilities. 20% of the places in the school are allocated to local children whose parents could not otherwise pay the fees. We have set up a sponsorship scheme for some of these children. Without such a scheme these children could not continue their education.

Despite being a good school it is lacking in some of the basics e.g. broken chairs, chipped walls etc. In addition to sponsoring some of the children African Mission has also purchased a laptop, a data projector, Science equipment and text books for four subjects for the school. 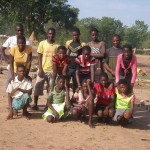 Many of those living within Fatima Mission are many miles from a school. For some it means a walk of 14 miles or more, leaving no time for study. In order to overcome this Fr Jeya decided to set up Bush Boarding Schools where pupils could study in the evenings and stay overnight. African Mission helped establish a Bush Boarding School in Lubimbi by providing the funding for a borehole and dormitory accommodation.

Fr Jeya is also using his Pastoral Centre as a Bush Boarding School for approximately 30 young people.  The children were sleeping on very flimsy matting and there was no hot water or heating in the building. We have now raised sufficient funds to pay for a new heating and hot water system and for 40 new bunk beds. 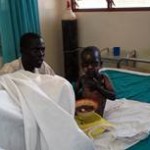 Dr Ray Towey trains medical and nurse students in the safe administration of anaesthetics and also raises the funds needed to buy much needed Intensive Care Unit equipment and medicines for St Mary’s Hospital, Gulu, Uganda. Dr Ray sent the photo to the right with the explanation “Child in Intensive Care Unit (ICU) with extensive burns. Not uncommon in Africa with open fires and cooking on the floor where children are around. This child is doing well and will be in ICU over Christmas but there is many weeks of care yet to come”. 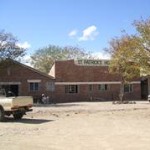 St Patrick’s Hospital is a 72 bedded hospital on the outskirts of Hwange, a Colliery town in the North West of Zimbabwe. It is the only public hospital in urban Hwange serving a population of 45-50,000. It is an efficiently run and very clean hospital but lacking basic essentials such as mosquito mesh wiring for the windows, some of which needed replacing. African Mission has provided the hospital with mosquito mesh wiring for the windows, curtain railings, a new industrial washing machine and part funded a new incinerator.

A more detailed breakdown of how we have supported the above projects can be seen by clicking the following links: